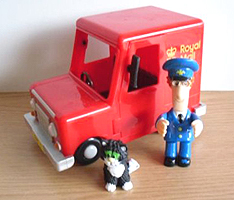 The ER vehicles were far larger than their ERTL and Corgi die-cast predecessors. They were made in tough plastic and featured moveable parts and opening doors.

They also released friction vehicle sets such as the one pictured above.

In 2008 ER plc ran into trading difficulties, going into administration the following year.

The Postman Pat Master Toy Licence passed to the Character Group plc who produced a new range of toys from 2009 under the Character Options brand.